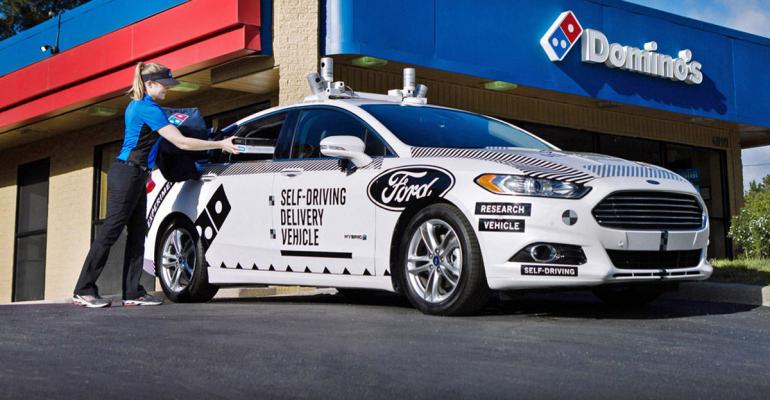 The future is now. At least, that’s what we keep hearing…

We hear about new technology day in and day out, on our social media feeds and on the news. Driverless cars have been in the news for a while now but have not rolled out to the masses. They are a relatively new concept – testing is being done slowly and steadily. The utmost safety precautions must be taken into account as it involves cars on the roads where pedestrians are.

One company that has started testing driverless car delivery is Domino’s Pizza. Last year, they partnered up with Ford to see if customers would like the idea of their pizza being delivered by self-driving vehicles. Ann Arbor, Michigan was the first city to have this test roll out. The cars could drive themselves but still have a backup driver at the wheel (with the front windows blacked out so customers would not interact with the driver). The cars, with radars and cameras attached, have a keypad mounted on the car. Customers have to type in a four-digit code to retrieve their order from a heated compartment. The customers in the test were chosen randomly when ordering a pizza and got a phone call confirming if they want to participate. If they agreed, they got a text letting them know when the vehicle was pulling up and how to retrieve their food.

Earlier this year, Ford rolled out their test vehicles to Miami. They deployed two fleets of cars. One fleet was made up of a variety of Ford vehicles and tested how customers interacted and reacted to deliveries made by Domino’s and delivery service Postmates. The executive VP and president of global markets for Ford, Jim Farley, said being in an urban area would help them understand how their vehicles handle making deliveries in complex situations. There are double-parked cars, traffic diversions and deliveries being made to apartments.

Ford plans to unveil fully driverless vehicle in 20121 also wants to understand the scenarios which companies would use them for. The company needs to fully dig through the data and make conclusions from there. Domino’s is also testing pizza delivery with drones.